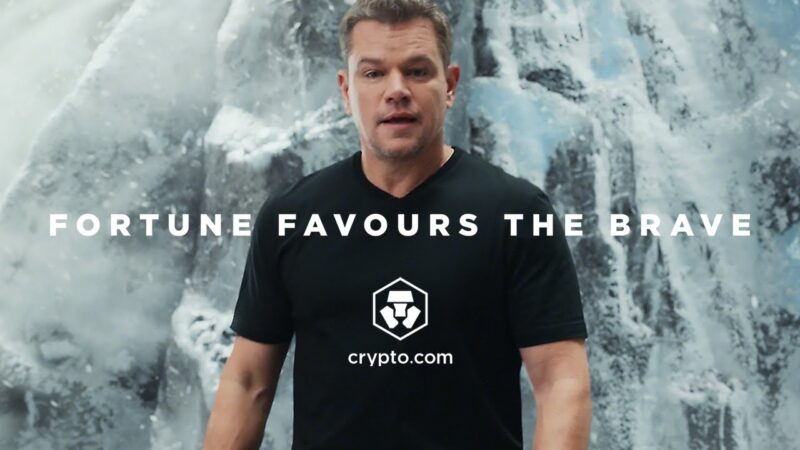 The value of Bitcoin has dropped roughly 30 percent since it was announced last fall that Matt Damon was becoming one of the faces of Crypto.com.

It’s not the actor’s fault, of course, but it’s not what anyone expected when the site released ads starring the Oscar-winning actor. For proof, consider this exchange from characters in the season-opening episode of “South Park” last week:

Cartman: “What does Matt Damon say on that Bitcoin commercial? ‘Fortune favors the brave.’”

Clyde: “My dad said he listened to Matt Damon and lost all his money.”

Cartman: “Yes, everyone did, but they were brave in doing so.”

As for crypto – whether you love it, hate it or completely don’t understand it — Marko Papic, chief strategist at Clocktower Group, had it right this week on “Money Life with Chuck Jaffe” when he said that Baby Boomers must  realize that they’re acting the way their parents did to rock’n’roll, shaking their fists at the kids and decrying the music as garbage.

“Crypto is rock’n’roll,” he said. “Embrace it.” That means it’s not going away, not that you should trade it or, worse, buy it on Matt Damon’s say-so.

But let’s not veer off into the good or evil of crypto. And as much as I’d love to discuss the moral bankruptcy of fabulously wealthy people getting paid to encourage their fans and admirers to make highly speculative investments, this isn’t about celebrity either.

This is about advice, who you take it from and how you size it up.

A recent study conducted by KeyBank showed that Americans – regardless of income level – said that the top factor making them feel financially resilient during the pandemic was information. But even among respondents who consider themselves “financial experts,” one of the biggest mistakes they acknowledged making was relying on non-experts to make decisions.

Evaluating expertise – your own and that of others – is hard.

It doesn’t matter if you measure up against objective criteria, the performance of experts or peers or the general populace, people tend to think they’re more expert than they really are.

The pandemic highlighted this in medicine and virology, but applies to the financial world too.

“Make sure you’re seeking guidance from those who truly are experts,” says Mitch Kime, head of consumer lending and payments at KeyBank. “There’s a lot of information that’s available to folks out there and a lot of, dare I say, questionable investments that can be made. Folks are seeing others make a lot of money in a short period of time, but be cognizant [that] there is a risk-reward tradeoff, and those that get wealthy overnight could easily lose it all.”

The problem endorsements are those coming from outside of someone’s zone of expertise.

Consider what happened in the case of Theranos, the health-care startup that a decade ago was making claims about blood-testing technology that would revolutionize medicine by allowing batteries of complex tests based on a few drops of blood taken in a finger prick.

Founder and chief executive Elizabeth Holmes – who was recently convicted to wire fraud and conspiracy to commit fraud and is facing up to 20 years in prison – raised nearly $1 billion from high-profile investors including Rupert Murdoch, the Walton family of WalMart fame, and the family of former Education Secretary Betsey DeVos. She built a board of directors that included two former U.S. Secretaries of State in Henry Kissinger and George Shultz – and others whose fame was made far from the corporate board room and the health-care arena.

A lot of money was invested on the basis of “If they’re involved, it must be good.”

We’ve reviewed Matt Damon’s movies, not his financial portfolio. Yes, he’s an investor in Crypto.com, although that “investment” may actually have been partial or full payment for his endorsement.

He told Bloomberg that he’s conservative with his investments – that hardly screams crypto — who will “ride or die with the economy” as he concentrates on his day job.

The way Matt Damon got rich quick was by writing and starring in an Oscar-winning movie. Lacking that skill set, you might want to chart a different course for yourself.

If that brings you to other “experts,” recognize that you also don’t know much about how your cousin, some Facebook friend from high school or the guy talking stocks at the barber shop made their money.

And, chances are, you only hear about their wins.

You’re being sold the sizzle, the chance to make a fortune or to latch onto a rocket as it blasts off. That comes with a side order of danger that’s typically not discussed.

That’s life as an investor.

Fortune may favor the brave, but logic favors caution.

There is no one right way to achieve financial freedom and reach your goals, but every path you follow – even the ones that look easy – starts uphill.

If someone suggests you can get to the top without doing the climbing, the brave thing to do is discount the message, the potential and their expertise, to look for what could go wrong instead of just following along.

Aligning your investments with your risk tolerance and time horizon will turn out better than syncing them with your favorite celebrity or your best friend. They’re not the ones living with the consequences of your decisions.