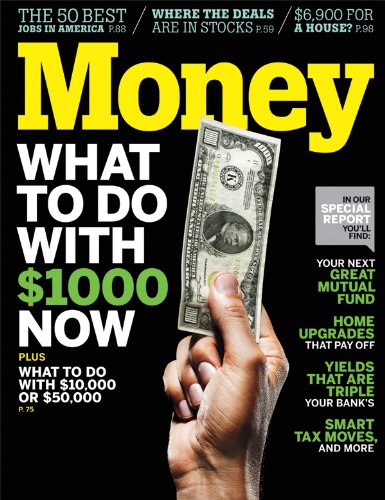 The five dirtiest words in personal finance are “now, next, best, top and must.”

As in “Five money moves to make now,” or “The best funds for the new year,” or, doubling up “The next move all investors must make.”

For years, lines like those – appealing to base instincts of consumers – were a staple of Money magazine covers. The magazine used focus groups to test for cover lines that would make its product jump off the newsstand, and the same basic themes came up again and again.

As personal finance journalism proliferated with the evolution of the Internet, however, the magazines broadened their focus, and reduced their reliance on the bad words to focus on the good ones, the ones that could educate and inform consumers in ways truly befitting journalistic traditions, independent analysis of financial products and schools of thought.

That’s why it was so sad last week when Meredith Corp. – which acquired Money when it bought Time Inc. early in 2018 – announced that it would stop publishing the 47-year-old printed magazine effective with the June/July issue. Meredith – which was rumored to be attempting to off-load the entire Money franchise at bargain-basement prices – announced that it would keep Money operating as a digital brand.

Money is hardly alone in this fate. Of the magazines I mentioned a moment ago, many are long defunct, and the few survivors have cut down on the issues they publish, smartly focusing on their digital survival.

For investors, this erosion in the mainstream personal-finance media is a loss on several fronts.

For starters, as the personal-finance magazines evolved and left the dirty words behind, a new generation of bloggers, podcasters and quasi-independent financial sites picked them up. You don’t have to look far these days to find lists of, say, the “best credit card deals now,” but you may have to worry that many of the card issuers being reviewed are actually paying for the “independent analysis” posted on the sites.

The sponsors’ efforts never seem to get negative reviews and “best” deals lists often are constructed in ways that favor or highlight the sponsors.

“People will flock to personal finance journalism if it’s well done, but I’m not sure the average person can tell the difference between what is well done and what is conflicted,” said Chris Roush, a business-journalism professor at the University of North Carolina who runs the Talking Biz News blog (talkingbiznews.com) “It used to be that you could go to Money or to Smart Money – when that magazine was around – and feel really confident in what you were getting, but now personal-finance is becoming more and more specialized and segmented. You really have to look – and look for the problems and the conflicts – to find real, good advice.”

The blogosphere has become a hotbed for personal finance counsel, where much of the content is good or, at worst, mostly harmless.

But as this environment becomes more popular and successful, some of the folks behind the sites are putting their potential to profit ahead of honesty and objectivity.

There are plenty of cases where the people running popular web sites are endorsing services they have never tried — or who are featuring specific companies and partners – based entirely on affiliate programs. (Affiliate programs, essentially, are commission-driven incentives where the media company highlights a product or service and gets a kickback when its audience follows through and becomes a real lead or an actual sale.)

There’s nothing inherently evil in affiliate deals, any more than there is something wrong with publications taking advertising from financial-services firms.

The issue is that the divide that separates the editorial and advertising operations at a place like Money magazine has never been in place for the person who started blogging about their efforts to beat back debt and who grew into a media influencer.

I’m cynical about the traditional media too; I have been ever since I found out about things like Money testing cover lines rather than putting stories on the cover based entirely on the merit of the news. The things I see behind the scenes in the world of bloggers and podcasters have made me skeptical, even as I know that there are good sights out there.

But the more that the upstarts and the independents make their sites look and act like sites for the traditional personal-finance press, the harder it is to tell who deserves your respect and who you want to follow.

Picking the right – or wrong – credit-card deal can cost a consumer hundreds of dollars; buying high-cost and/or mediocre investments can reduce returns for a lifetime. Losses – whether to poor decisions or sub-optimal choices – add up to real dollars over the course of a lifetime.

The democratization of personal-finance journalism demands that consumers scrutinize news sources – and the motives of those sources – with the same detail they apply to the advice itself.

It’s not enough to say “Does this advice make sense? Does it seem right?” You have to also ask “Were there any special motivations – beyond simply informing consumers – behind these suggestions?”

You can pay for financial advice in many ways. You can go to the websites and search for free advice, you can buy the magazines – though with Money gone, you’re looking mostly at Kiplinger’s Personal Finance if you want personal-finance coverage more than once every quarter – or you can look for outside help and hire an adviser.

If free, no-cost counsel is bad advice, it has a very real cost.

Hiring an adviser at a reasonable price might be better than jumping into the abyss and hoping you can recognize the problems.

A web search for financial news and information suggests that there is more good stuff out there than ever before; the demise of Money to a shell of its former self says otherwise.