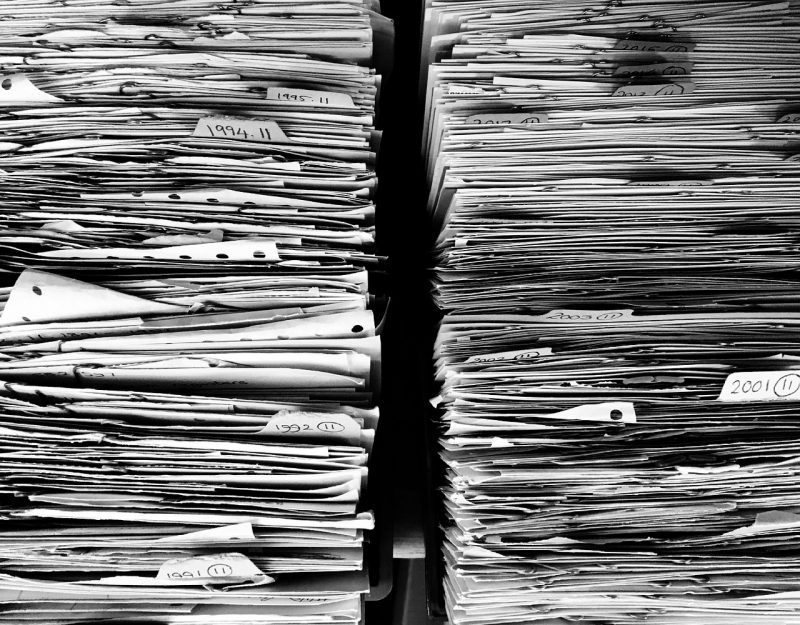 “Grandpa Jack” is 80-years young, and along with scrapbooks and mementos of a life well-lived, he still has every check he’s ever written, along with copies of every bill he ever paid.

As he prepares to move from his long-time family home in Pembroke, Mass. to an apartment attached to his daughter’s house in nearby Scituate, Mass., his family had just one request: Leave the financial paperwork behind.

“My father taught me how to balance my checkbook, and told me that keeping checks was important,” Jack explained. “You need a financial record. You need to be able to show that you paid your bill or that you bought something and that the warranty is still good. So I need all of that stuff, even though my family says I don’t.”

Truthfully, I said that he didn’t need it either, a few months ago when I wrote about spring-cleaning files. That column was seen by his daughter Nancy, who wrote hoping for an intervention.

“It’s in file cabinets and crates, an attic full of boxes, things that were kept meticulously at one time when Mom was alive, but which now is a mess as old boxes fall apart,” wrote Nancy. “He insists that everything must be kept. He has every warranty on everything he bought, every owner’s manual, and everything financial.

“We don’t have space for it, and can’t believe he really ‘needs’ it. He won’t let us put it in the garage because it could be affected by weather, and he doesn’t want to a storage unit (which he can’t really afford anyway), but this is really affecting our ability to make this move, which is in everyone’s best interest.”

I went out to meet Jack, not to stage an intervention but to satisfy my curiosity and to hoping to see some cool and interesting old stuff.

What I found looked as if paperwork bombs had exploded around the office and particularly in the attic. It would have been considered a hoarding situation, except that Jack’s house is clean and useable. It’s just beyond cluttered with paperwork.

Jack swore he could show me checks he had written to pay Nancy’s college tuition, or for car payments on his 1962 Chevy.

Jack is far from alone. The lessons of previous generations trying to raise financially responsible kids are far different from what tech-savvy youngsters of today can do.

Yes, I taught my kids how to balance a checkbook, but I doubt they do it or even remember how. They check account balances online, reviewing purchases and transactions to make sure they are correct; they don’t “play the float” – the time lag between writing or depositing a check and when it hits their account – and they write almost no checks, preferring electronic-transfer services like PayPal and Venmo along with debit cards.

When my father showed me how he balanced his checkbook, he was careful to let me know that keeping checks was important, at least until they cleared and my balancing efforts showed that everything was right.

Jack’s dad – who survived the Depression — told him to keep everything, just to be safe no matter what happened with the banks.

And so he did.

Time didn’t change his thinking. As he aged, I believe that giving up outdated paperwork seemed like asking him to consign much of his life to the shredder.

But Jack also acknowledged the problem of a lifetime’s worth of papers; he joked about his “space-eating fire hazard.”

I asked Jack to find for me a few things that he felt were a part of his history, like the tuition receipt, the ledger of his old expenses from the year after his marriage, a car-payment check from the first car his daughter rode in, and the final payment on his mortgage.

In setting out to find those things, he got lost amid the mess. He found the old phone bills from Bell Atlantic, a company that was merged into oblivion in 2000. There were statements from First National Bank of Boston – which eventually became Bank of Boston, merged with BayBank to make BankBoston, merged with Fleet Bank and ultimately was sold to Bank of America. He had leftover checks from each iteration, most on long-dormant or defunct accounts.

In the pursuit of a few things, Jack somehow recognized that he didn’t need all of the stuff.

The family started brainstorming and Jack talked about financial milestones. As the stories flowed, they searched for the good stuff and started piling up the trash.

If Jack hadn’t touched the paperwork in years – and couldn’t see needing it again before turning 100 – it was out.

Tax returns were kept, but “support documents” — bills, receipts and more that are the basis for your math — can be tossed four years after a return is due. Thus, any back-up paperwork in returns from 2014 (filed in 2015) can be trashed.

Investment papers were held until Jack and his family could ensure that brokerage firms had established the correct cost basis on securities. Beginning in 2011, brokerage houses and investment firms were required to provide cost information on stock purchases (in 2012, the requirement spread to mutual funds, options, bonds and other securities); most brokerage firms work with long-time customers to establish the cost-basis of long-term holdings. Once the institution’s accounting is correct, old brokerage statements can be discarded.

Paystubs, bank statements, canceled checks and consumer bills and receipts generally fall into the realm of “support paperwork” on tax returns, so the old stuff can go, though there are special situations (like in a divorce, or with warranties and buyer-protection programs) where the old paperwork may be useful or necessary.

Ultimately, Jack and his family are working through the papers. It’s bringing them closer together, according to Nancy, bringing out a lot of stories and memories that might otherwise have been lost in the future bonfire that she used to dream about.

There is some searching of old photos to go with old financial doo-dads for the memory boxes being made for all of the grandchildren.

Old financial paperwork is a sore subject in many families; it is something I hear about all the time.

Find a way to fix it. Do it together, while you can; you’ll leave your family with memories, and an understanding of your financial life, rather than with a burden and a mess.