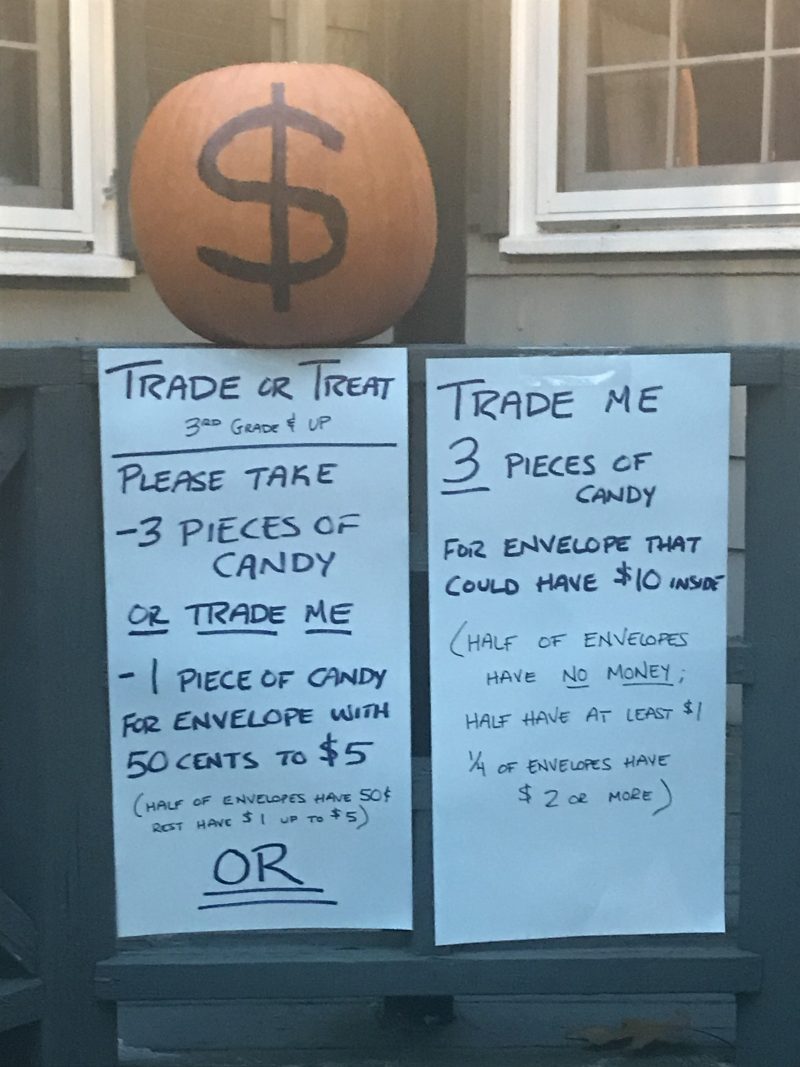 I know one thing that kids like more than candy for Halloween.

For the last three years, I have answered the cry of “Trick or treat?” with a very different question: “Cash or candy?”

It’s my effort to change the game on All Hallows Eve, to nurture the children not with nougat and caramel but with a small lesson about money and financial choice.

I’m talking it up now for anyone who might want to follow my lead or come up with their own program to make Halloween something more than a gluttonous candy-fest. A number of listeners to “Money Life with Chuck Jaffe” developed personal variations of “Trade-or-treat?” and all say they liked it better than simply handing out candy. (To be fair, everyone fessed up to never particularly enjoying the role of Candy Man, so they were anxious to do something different.)

This will be the fourth year that the “Money Pumpkin” welcomes kids to my house. Each year, I change the choices the children face at my doorstep; that’s part of the fun.

One look at me and you’ll know I am not anti-candy; if anything, I personify America’s undeniable obesity crisis. But my change is not about food activism; instead, it’s about loving my neighborhood and wanting to give the 80 to 100 costumed children who reach my door the chance to home with food for thought.

Certain rules apply to Halloween at my house. Coming to my door “earns” three pieces of fun-sized candy, worth roughly 12.5 cents each. Kids in third grade and above can play for something bigger.

In 2016, eligible kids had a simple choice: take the candy or draw a coin envelope from the money jar. Each of the 50 envelopes that year had at least one quarter in it; the “jackpot” was $5.

When you’re the only house in the neighborhood giving away cash, it’s no surprise that 50 kids took the envelopes; two more would have, had they arrived before we ran out. Just four children chose candy.

In 2017, age-eligible children could give up the candy to draw from envelopes that held at least 25 cents and up to $3, or they could take none of my candy and let me pick a random fun-sized candy from their bag, thereby trading up to choose from envelopes containing 50 cents minimum up to a $5 grand prize.

That was the best deal that year, though I’m not sure the children knew or cared. They gave up the 37.5 cents of “return” they “earned” for coming to my house, surrendered a candy worth another 12.5 cents, but had no real chance of loss since the minimum win was 50 cents, and their potential windfall was 10 times their “investment.”

A year ago, the stakes were raised again, creating the potential for children to leave my house with nothing but a financial lesson.

This time, they could take three pieces of candy or:

1) Trade one piece of fun-sized candy (picked randomly, they can’t just pick stuff they don’t like) for an envelope with at least 50 cents to a maximum of $4. Half of these “small-money envelopes” held the 50-cent minimum.

2) Trade three candies to pick from 50 envelopes in which half of the pouches were winners, with half of the winners having at least $1 rising from there to two $5 winners and one $10 jackpot. The downside risk, however, was that half of the “big-money” envelopes had no money at all.

In the end, 43 kids played for big money, 22 others took the safer choice and 10 stuck with candy.

Interestingly, the total amount of money at stake in the big-money envelopes was just 50 cents more than what was in the small-money envelopes; thus, if all envelopes had been played, kids were choosing roughly the same average result, no matter how much candy they gave me.

Twenty-three big-money players picked empty envelopes. As a result, the average win from the big-money choice was $1 (and that does not count the 75 cents those kids gave up to play, the three pieces of candy they didn’t take and the three more they traded me).

By comparison, the 22 small-money players took home a combined $28, slightly more than $1.25 per person.

This year, I’m adding a lottery element; kids will have the chance to trade six pieces of candy to play for a $20 jackpot. But the 50 envelopes will have a grand prize, a $10 second prize and nothing at all for the rest. Even if the jackpots are won, the average “payout” will be far worse; I’m hoping they make smarter financial choices.

The envelopes will all an explanation of the choices and the odds; I ask the kids to not open the envelopes until they get home, and to discuss the results with parents, asking what mom or dad might have done.

I’m hoping there are lessons about risk and reward here, about choices and the value of money.

In the moments spent with me, I have heard children talk about “return on investment,” discuss risks, gambling, the value of money and more. Kids have figured out every angle – they’ll do extra houses to make up for candy they trade me, or they’ll go home and offer their parents the chance to buy their treats, a cash-for-candy approach that the National Financial Educators Council advocates (that group inspired my adventures).

My costs last Halloween were roughly $85 bucks in cash and candy, and a few dollars more for supplies (this year, I’m buying just one bag of candy). It’s about double what I used to spend to giving out Halloween candy, but challenging the children and chatting with a few of my neighbors makes it worth every penny.

I encourage you to try something like it this year.